UPDATE February 2020: This house is for sale! It's been an absolute blast owning this house for the last nine years but I've now moved to Austin for work.

I live in a LAN-party-optimized house. That is, my house is specifically designed to be ideal for PC gaming parties. It's also designed for living, of course, but all houses have that. 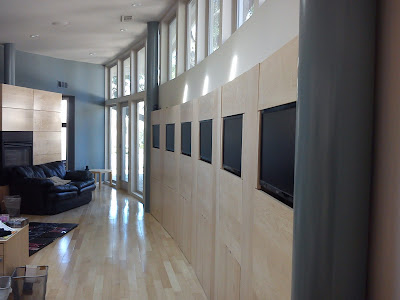 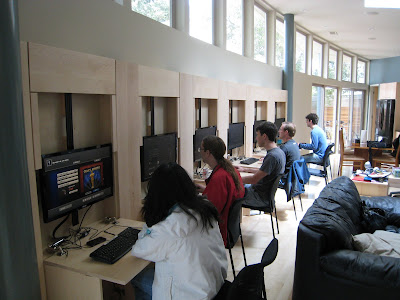 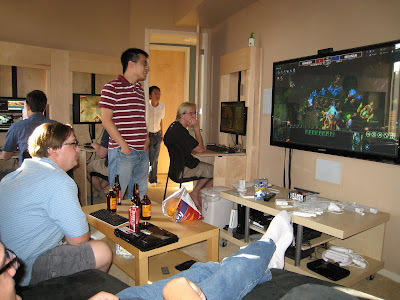 The house has twelve of these fold-out computer stations, six in each of two rooms (ideal for team vs. team games). The actual computers are not next to the monitors, but are all in a rack in a back room. The stations were built by a cabinet maker based on specs I created. The rest of the house was designed by my dad, Richard Varda, who happens to be an architect.

I also have two big TVs, one 59-inch and one 55-inch, each of which has a selection of game consoles attached. In practice we usually end up streaming pro starcraft matches to these instead of playing games on them.

For the 0.001% of you who read my blog before this post: Sorry for the long lack of posts. In March I moved into a new house. I have been working on a number of projects since then, but they have all been related to the house, and I wasn't prepared to talk publicly about it until certain security measures were in place. That is now done, so let's get started!

I've written more blog posts about this with tons more details. Check out the backstory and the technical design and FAQ.

At the time I bought the hardware (March 2011), I felt this selection provided the best trade-off between price and performance for gaming machines that need to last at least a few years.

Although I own the machines, I do not own twelve copies of every game. Instead, I ask guests to log into their own Steam / Battle.net / whatever accounts, to play their own licensed copies.

Of course, maintaining 12 PCs would be an enormous pain in the ass. Before each LAN party, I would have to go to each machine one by one, update the operating system, update the games, etc. Everything would have to be downloaded 12 times. I do not do that.

Instead, the machines boot off the network. A server machine hosts a master disk which is shared by all the game machines. Machines can boot up in two modes:

So, before each LAN party, I boot one machine in master mode and update it. Then, I boot all the machines in replica mode, wiping their local COW overlays (because they are now out-of-sync with the master).

I'll talk more about this, and the software configuration of the game stations in general, in a future post.

I have several security cameras around the house. When I'm not home and motion is detected, pictures are immediately sent to my e-mail and phone. I can also log in and view a real-time video feed remotely. I wrote some custom software for this which I'll talk about in a future post.

That said, despite all the electronics, my house is probably not a very attractive target for burglary. Much of the electronics are bolted down, the custom-built computers are funny-looking and poorly-configured for most users, and there is really nothing else of value in the house (no jewelry, no artwork, etc.).

There are all kinds of things I hope to do in the future!

If you want to know more, check out these later posts about my house:

New comments are not allowed.