Ekam now has an Eclipse plugin! As always, all code is at: 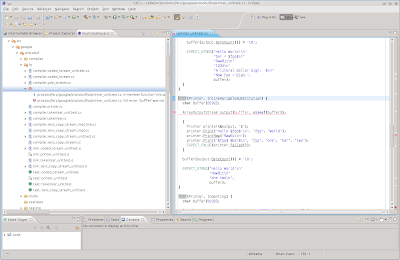 So, let me start with a story. A little earlier today, I was making a small edit to Ekam. I made a change, saved the file, then saw an error marker (a red squiggly underline) appear on the line of code I had just written. I hovered over it and a tooltip popped up describing a compiler error. I figured out what the problem was, edited another file to fix it, and saved that. The error marker in the first file immediately went away.


It wasn't until several moments later than I realized that Eclipse's CDT (C++ developer tools) does not actually mark errors like this in real time. Normally you have to run a build first, and let Eclipse collect errors from the build output. It's normally only in Java that you get such fast feedback as you type.


What had actually happened here is that when I saved the file, Ekam immediately built it, then it sent the error info to my Ekam Eclipse plugin, which in turn marked the error in my editor. This was the first time I had actually edited Ekam code with the new plugin active. It literally took less than a minute for the plugin to start saving me time, and I didn't even notice until after the fact because the process seemed to natural.


As soon as I realized what had just happened, I started squealing with delight.

Here's what the plugin does so far:

I have very little experience with UI code. One thing I'm finding interesting is that when I run my code, I immediately notice obvious UX problems that weren't at all obvious when I was imagining things in my head. Little tweaks can make a huge difference. I really have to try things to find out what works.

Neither Ekam as a whole nor the Eclipse plugin in particular are anywhere near complete. However, I think they are working well enough now that it's time to work on something else using Ekam. I could go on adding features that I think are useful forever, but actually trying to use it will tell me exactly what the biggest pain points are. I will then go back and tweak Ekam as needed to facilitate whatever I'm working on.

So, next week, I plan to work on Captain Proto, which I've put off for too long.

Posted by Kenton Varda at 8:31 PM No comments: